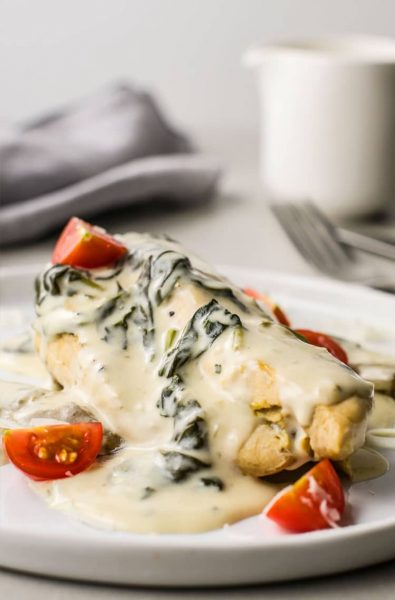 If you like the popular appetizer dip, you’re going to go crazy over this recipe! Our Slow Cooker Spinach Artichoke Chicken takes all the flavor from the dip and turns it into a delicious dinner. It’s still as tender and creamy as the delicious appetizer, but with a fraction of the calories. Not only that but since we cooked it up with chicken, you won’t need to waste your carbs on dipping bread!

This simple, slow cooker chicken recipe looks gourmet, but it’s so easy to make. You just toss the ingredients into the Crock Pot and turn it on low for six to eight hours. The chicken will be melt-in-your-mouth tender, and that sauce is so creamy, you won’t believe it’s actually healthy! This recipe is perfect for lazy autumn weekends or wowing company at a dinner party.

You might be wondering why we say to use reduced-fat cream cheese, but state NOT to use the fat-free stuff. What’s the deal with that? Wouldn’t we want you to use the lowest calorie, lowest fat ingredient possible? When it comes to cream cheese, it’s not worth it, and we’ll tell you why.

The thing about milk is that it’s naturally full of fat. It’s one thing to opt for skim milk at the store. To make that milk less fattening, the manufacturer only has to skim the cream off the top. Same thing with 2% milk: they remove the majority of the cream before homogenizing the milk.

Using reduced-fat cream cheese is a great way to achieve a delicious sauce that mimics everything you love about spinach artichoke dip. But, it cuts out a significant amount of calories as compared to the full-fat versions without adding any extra sugar or sodium. How great is that?

cheesecake dip is a creamy, no-bake appetizer with all the flavors of cheesecake – in a fraction of the time! A fluffy, whipped cream cheese

Weight Watchers English Muffin Pizza are a long-time family update!!  Personally, I love how easy they are to make and the fact I can easily