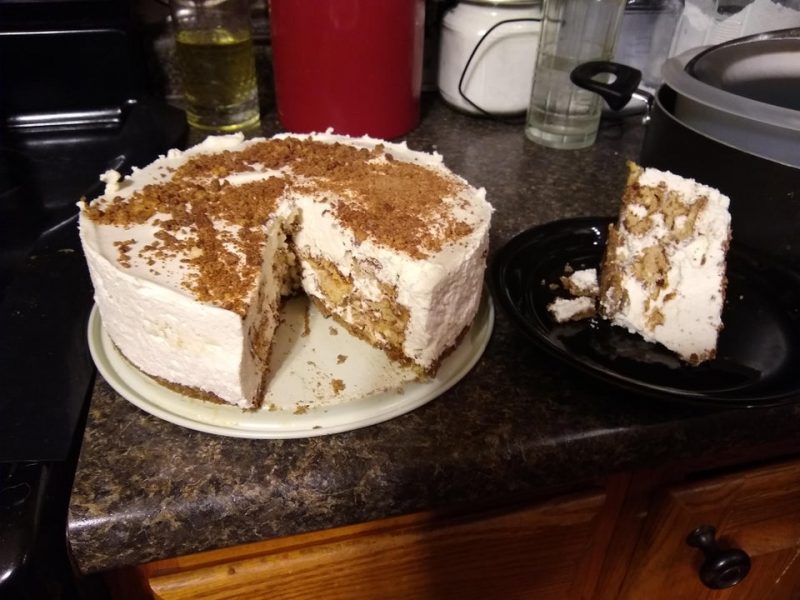 adapted them for this recipe a bit.

Chafflee Churros – You’ll need to make at least 3, 2 for the cake, 1 for “quality control”.

Combine everything but the topping ingredients in a bowl and mix well. Make chaffless with your favorite waffle iron using 1/3 of the batter. Let them stand for a few minutes to stiffen up. Cut them in half, and then cut into strips place in a large bowl. In a separate bowl, mix the ingredients for the topping and pour over the churro strips. Toss them around in the bowl to coat everything. Hold the churros overnight to let all the flavors mingle and dry out the churros a bit.

2 cups of mixed nuts (I used walnuts and pecans)

Melt the butter and oil in a pan. Put the nuts and sweetener in a food processor and pulse until a fine flour is formed. Combine with the oil in the pan and cook over medium heat for a few minutes to toast the nuts. Spread out the paste that forms on the bottom of a 9” spring form pan and place in the refrigerator while you make your whipped cream.

Sprinkle the gelatin over 1/4 cup cold water in a small saucepan (or even a metal measuring cup) and “bloom” at room temperature for 5 minutes. Then gently warm over low heat until just melted. (Do not allow to boil.) Remove from the heat and stir in the bourbon, and vanilla.

Whip the heavy cream, powdered erythritol and salt in the bowl of a stand mixer on high until soft peaks form, about 1 minute 30 seconds. Reduce the speed to low and drizzle in the cooled gelatin mixture. Increase the speed back to high and whip to stiff peaks, about 30 seconds more.

Place a small layer of the whipped cream on the bottom of the pan, then laydown a layer of churros. Cover the churros with more whipped cream. Then make additional layers until your pan is full to the top. Sprinkle on any leftover topping from the churro bowl. Place in the refrigerator for at least 8 hours to set.

Chicken Parmesan may be the ultimate comfort food. Juicy, tender, and crispy breaded chicken breasts are baked to perfection in marinara sauce with mozzarella and